On the morning of February 9, roughly eight and a half hours into the second government shutdown of FY 2018, President Trump signed H.R. 1892, the “Bipartisan Budget Act of 2018,” into law. The bill extends a fifth continuing resolution (CR) to fund the government through March 23, but more importantly, it raises the spending limits for both defense and nondefense funding imposed by the Budget Control Act (BCA) of 2011 for two years, FY 2018 and FY 2019. In addition to increasing the budget caps, the bill lifts the debt ceiling until March 2019, provides $90 billion in disaster relief, and further extends the Children’s Health Insurance Program. Below are four critical questions about the budget agreement and its implications for defense spending.

Q1: What does the funding deal include for defense?

A1: Negotiated by Senate Majority Leader Mitch McConnell and Minority Leader Chuck Schumer, the Bipartisan Budget Act of 2018 (BBA 2018) is a two-year agreement that raises the spending limits for both defense and nondefense in FY 2018 and FY 2019. As shown in Table 1, the deal raises the caps for the national defense base budget by $80 billion in FY 2018 from the previous limit of $549 billion and increases the FY 2019 cap by $85 billion from $562 billion. In comparison, the nondefense funding for FY 2018 is raised $63 billion above the cap of $516 billion while FY 2019 funding includes a $68 billion increase above the prior cap of $529 billion.

Overseas Contingency Operations (OCO) funding—the account intended to fund operations in Iraq and Afghanistan—has often been used to supplement funding levels above the adjusted budget cap levels. Because OCO is not subject to the spending caps and the law does not specify which programs may or may not be funded under OCO, the account has become a loophole to increase funding for base defense priorities without violating the caps and triggering sequestration.

Q2: How does this budget deal compare with previous agreements in terms of defense spending? 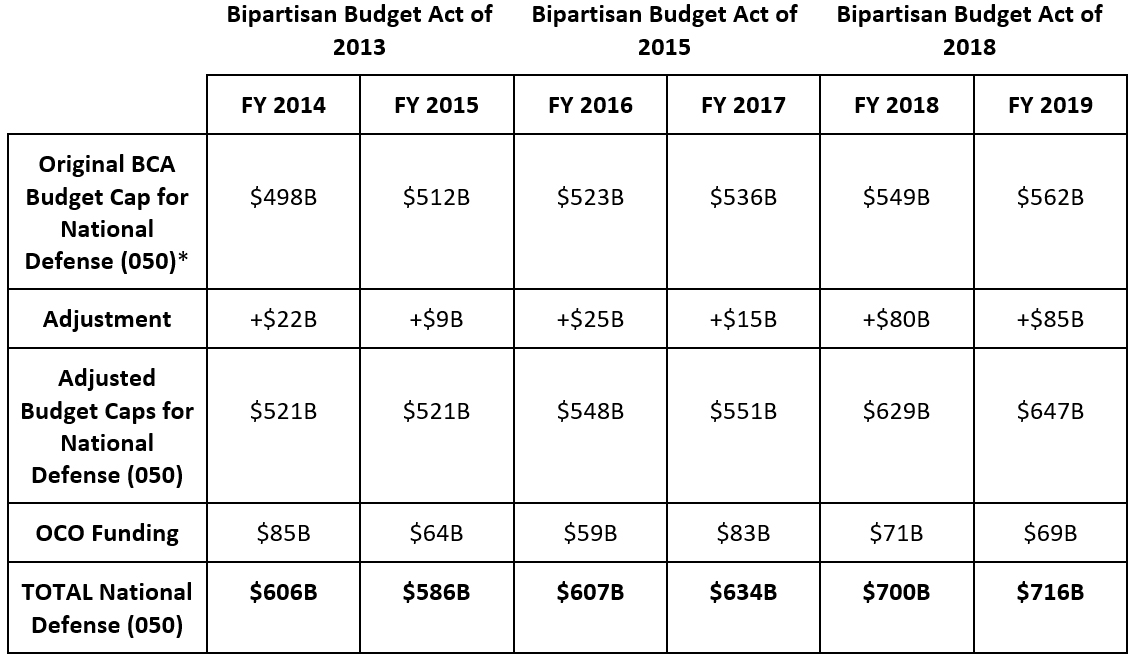 *Values may not add up due to rounding.
**Includes the automatic spending reductions specified in the Budget Control Act of 2011.

Of the three budget deals, BBA 2015 was the only agreement to specifically detail OCO funding levels for the two relevant fiscal years in the legislation as part of the deal. But BBA 2013 and BBA 2015 both relied significantly on additional OCO funding to raise spending levels for defense (and to a lesser extent nondefense), whereas the increase in BBA 2018 is primarily in the adjusted budget caps for the base budget rather than OCO. In anaddendum to the president’s FY 2019 budget request, OMB director Mick Mulvaney—who had previously condemned OCO as a “slush fund,” “sham,” and an “accounting trick” while serving as a member of the House—claimed the higher spending caps mandated under the deal provide “an opportunity to fix some long-time budget gimmicks that the Congress has used to circumvent the spending caps and add billions to the Nation’s deficits,” an obvious reference to the war funding account.

Q3: What does the budget deal mean for defense funding in FY 2018?

A3: The BBA 2018 provides more funding for defense than President Trump requested in his administration’s May 2017 budget request. Whereas the administration had originally proposed to raise the budget cap on base defense spending by almost 10 percent to $603 billion, the BBA 2018 raises the cap by 15 percent.

*The administration originally requested $64.6 billion in OCO funding for FY 2018, then requested additional emergency supplemental funding of $4.7 billion that was passed in the CR in late December and $1.2 billion in the CR that accompanied BBA 2018.

Importantly, the budget deal does not provide actual appropriations that specify how the money will be used. The government remains under a continuing resolution until March 23, and over the coming weeks congressional appropriators will need to follow up the budget deal by passing appropriations bills for FY 2018 that specify how the money will be allocated. While these appropriations have not yet been finalized, the House and Senate appropriations bills (and to a lesser extent the FY 2018 National Defense Authorization Act) provide a good indicator for how Congress will use the additional funding granted by the BBA 2018.

Q4: How does the budget deal affect defense funding in FY 2019?

A4: The Trump administration’s FY 2019 budget requests a total of $716 billion for national defense, a 7 percent increase above the $668 billion projected for FY 2019 in last year’s budget request. The administration had planned to put much of this increase into OCO to skirt the budget cap, but the BBA 2018 budget deal allowed it to push the increase into the base budget under the higher budget cap. Because the budget deal was reached just three days before the official release of the FY 2019 request, the administration was not able to revise all of the budget materials in time to reflect this change. 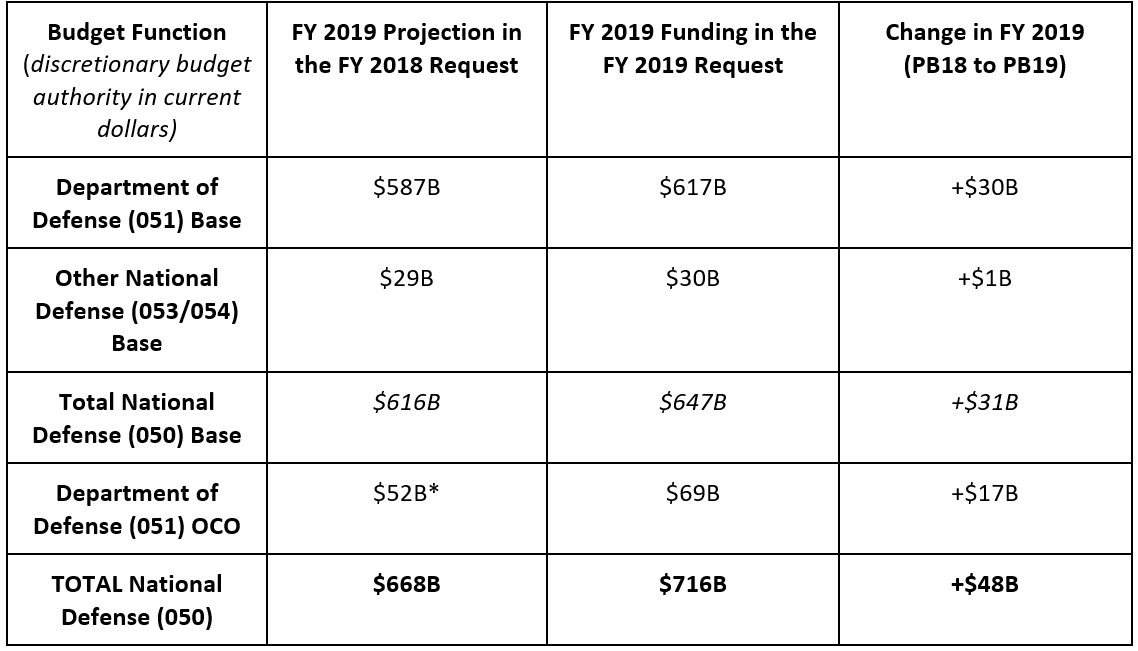 *The FY 2018 budget request included a placeholder of $52.0 billion in OCO funding.

In the rollout conference and overview for the FY 2019 defense budget request, DoD comptroller David Norquist was keen to emphasize that the “National Defense Strategy guided the process [DoD] used to build the budget.” The National Defense Strategy “determined the issues we examined, the decisions we made, and the level of funding that was required.” Norquist additionally noted that BBA 2018 increased defense funding to “a level that would support the strategy.” Whether that funding will be used effectively to “restore and rebuild our military” will be seen over the course of the next fiscal year.

Critical Questions is produced by the Center for Strategic and International Studies (CSIS), a private, tax-exempt institution focusing on international public policy issues. Its research is nonpartisan and nonproprietary. CSIS does not take specific policy positions. Accordingly, all views, positions, and conclusions expressed in this publication should be understood to be solely those of the author(s).

© 2018 by the Center for Strategic and International Studies. All rights reserved.